Ah, October. It’s that magical time of year when motorcyclists across North America plan rides to make the most... 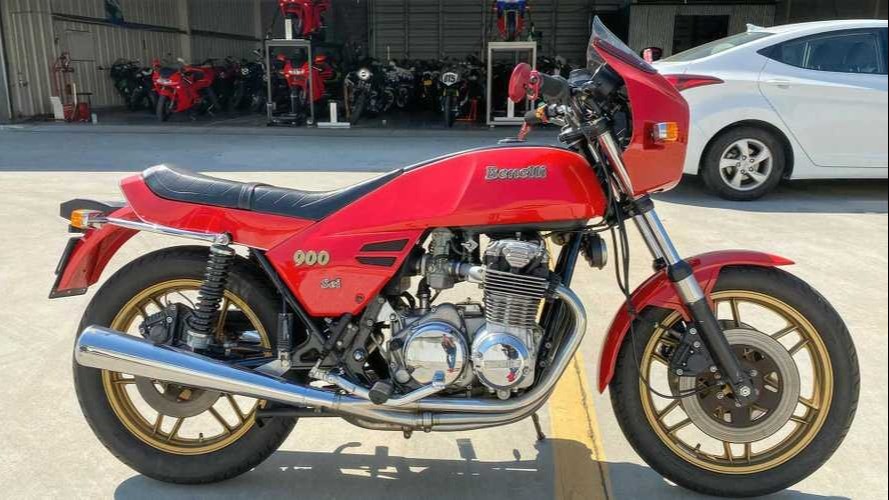 Ah, October. It’s that magical time of year when motorcyclists across North America plan rides to make the most of fall color sightseeing. Just because it happens every year doesn’t make it any less enjoyable. Apparently, it’s also when the rare Benelli Sei makes its annual appearance on a friendly auction site near you!

In October, 2019, Kate introduced you to this beautiful 1976 Benelli Sei 750. Today, I’m gonna tell you about its slightly bigger brother, a 1980 Benelli Sei 900. Amazingly, the example that’s currently for sale at Iconic Motorbike Auctions has just 364 miles on the clock—or 587 kilometers, since it was originally imported from Italy in 2016, when it had an even more astonishing 50 miles on the clock.

By 1978, Benelli—which, along with Moto Guzzi, was owned at the time by avowed sports car guy Alejandro de Tomaso—was determined to further its six-cylinder plans. Figuring that more displacement would equal more sales, team Benelli bumped up the bore and stroke, upping that figure to 906cc. The engine also gained two inches of width—to a finished width of 25.75 inches. That’s two entire feet and 1.75 inches wide, folks. Maybe that doesn’t seem overly huge in 2020, but it was the widest 6-cylinder powerplant on the market upon its introduction, according to Motorcycle Classics.

It came with a five-speed gearbox and a dry clutch (where the 750 had a wet clutch), as well as a funky dual-chain final drive that you can see in the photos. Three 29mm Dell’Orto carburetors came standard, as did a six-into-two exhaust from Silentium that replaced the earlier six-into-six unit seen on previous models. Yes, those are beautiful, gold Campagnolo wheels you’re looking at—and they’re made of magnesium.

A few trick bits from Moto Guzzi made their way onto the 900s, including that tidy little fairing to help provide a bit of wind protection. The Sei 900s also had Guzzi-sourced linked brakes, as well as an instrument cluster straight off a V50. Although production ran from 1978 to 1989, fewer than 2,000 total Sei 900s were ever made. Legend has it that only 80 or so made it to the U.S. market—which may or may not be true, but it does make for a good story.

Now, about this particular Sei 900. The current owner purchased it in 2017, and immediately did some important maintenance. That included brand new tires and spark plugs, an oil change, and a carb rebuild. He also repainted both the front fairing and fender, which he said were faded—and since it’s a 40-year-old machine, that’s totally understandable. He also installed bar-end mirrors—along with foam grips, for some reason. Hey, different grips for different folks, and you can always change them if you win this auction, right? Right.

One thing I absolutely love about some older bikes is vintage documentation. While you apparently only get invoices from the seller’s period of ownership (and not the 37 years prior), you do also get bound copies of both the 750 Sei and 900 Sei workshop manuals. That’s pretty excellent, in my book, and I’d totally spend an afternoon poring over those for fun. This Iconic Motorbikes auction ends on October 14, 2020, and the bid is up to $7,100 at the time of writing. The reserve has not yet been met, and it’s located in California.