We know what you're thinking. Why race two cars from such dissimilar genres? The Chevrolet Camaro ZL... 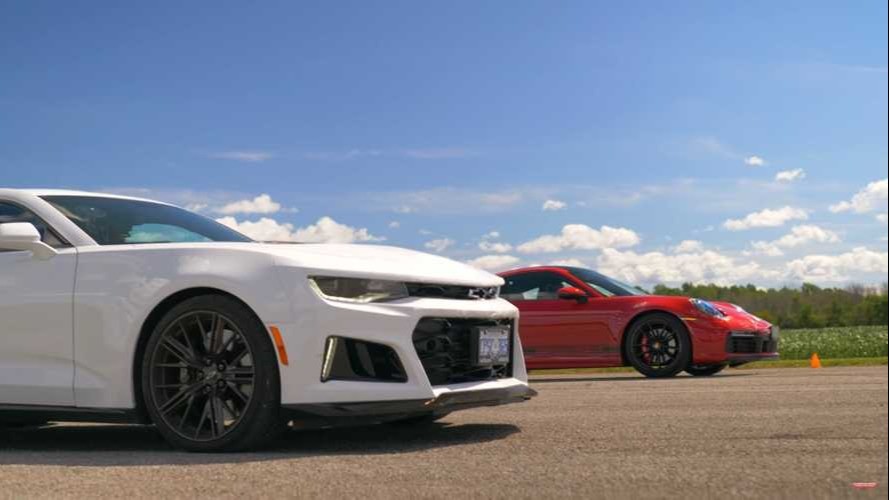 We know what you're thinking. Why race two cars from such dissimilar genres? The Chevrolet Camaro ZL1 is the pinnacle of performance in the Camaro line, packing a massive supercharged V8 with gobs of power and torque. Meanwhile, the Porsche 911 Carrera S is low in the 911 pecking order with modest power and a penchant for preferring corners over straightaways.

It's true that the 'Maro enjoys a considerable power advantage in this matching. On paper, it offers 650 horsepower (485 kilowatts) to just 443 hp (330 kW) from the 911. Even with the 911's considerable weight advantage of over 500 pounds, that's a big deficit to overcome. However, there's more to the paper matchup than just a power difference. Interestingly, both cars boast similar performance metrics for sprints to 60 mph and through the quarter-mile. It seems Porsche makes better use of its power than Chevrolet does.

t's also possible Porsche is underrating the 911, with some reports suggesting upwards of 480 hp (358 kW) in the turbocharged 3.0-liter flat-six. It's still far beneath the Camaro's output, but power is only one component of speed. It means nothing if you can't get power to the ground, and the Carrera's rear-engine configuration certainly gives it a starting line advantage. Perhaps that's why official stats from Porsche and Chevrolet actually have these cars surprisingly close in straight-line performance. Once again, that's on paper, and we all learned a long time ago that stats don't always translate to real-world results.

That becomes quite clear in the first of three races, where the Carrera absolutely destroys the Camaro. The unprepped surface used for the race isn't ideal for the ZL1's prolific torque, even with launch control enabled. The 911 managed a much better launch, and though the Camaro gained a bit of ground back towards the end, it wasn't nearly enough.

The second race also involves a standing start launch, but without using launch control. Following that contest, a third and final race with a rolling start takes the traction-at-launch problem completely out of the equation. Does the Camaro's horsepower advantage become clear in these two races? We'll let the video tell the tale, but here's a teaser: the outcome is way closer than you'd expect.